Max and Rae stood at the end of a hallway of the Vienna Hotel.  The restaurant had been a perfect place to shoot but an event in the lobby started blaring horrible pop tunes.  We packed up our equipment and settled for this location.

“They are closer to dying than we are.  We can’t ask them.”

“Maybe that is precisely why you should ask them,” I offered.

Both of the young women’s eyes widened.  “We can try,” said Max.  Rae nodded in agreement.

Rae and Max are filmmaking students of mine from Union.  They’ve shown a penchant for quirky pieces and this one would fit right in.  Our aim: to make a film along the lines of Jean Rouch and Edgar Morin’s 1961 classic Chronique d’un Été, in which two young women went round Paris asking passerbys simply, “Are you happy?”

But Max and Rae would probing a subject that inspires mountains of superstition in China.

“We will ask them: Are you afraid of death?” said Rae. “And I know where we should film it.”

Yuanmingyuan Park was the original summer palace for the Qing Dynasty, the last dynasty of China before the revolution in 1911.  The site covers 860 acres of lakes, gardens and palace ruins.  British and French troops looted and burned the summer palace during the Second Opium War in 1860 and again in 1900.  The ruins are left as a symbol of the perils of colonialism and the aggressiveness of marauding foreign powers.

In Chronique d’un Été, the camera surreptitiously views the action from across the street or behind a bush.  I told Max and Rae this wouldn’t work here.  “People notice me immediately.”  My point was soon proven.

The family sat under a row of linden trees along a lotus flower canal.  Dark skin, straw hats, sharp voices.  “You want to give them a try?” I nudged my hesitant students.

“I don’t think they speak Mandarin.  Probably from the south somewhere….and the father is very old.”

With trepidation they advanced, steeling themselves for an awkward exchange.  But before they got far, the family met them in the end zone.  They had surrounded me.  The old father grabbed my hand and struck a pose for the cell phone camera his son aimed in our direction. Soon everyone was around me for the picture.  It is in these moments the celebrity a Westerner sometimes feels in China can easily swell the head.  When the smiling clan receeded I turned to Max and Rae. “Okay. Now go ask them about death.”

It is said that when Yuanmingyuan Park was destroyed over 300 eunechs and ladies-in-waiting burned to death in the conflagration. Unbeknownst to the English and French troops they had hidden in the bowels of dozens of buildings spread across the sprawling pleasure garden. Today, little electric trams take visitors to the site of the heaviest destruction. Following an older man with a big camera we stepped off the boardwalk into the marble ruins of one of the great halls. Teetering Ionic columns underscore the irony of the architectural homage paid the pillaging Western powers by Emporer Qianlong, under whose commission the park was greatly expanded.

My students approached the man.  Before they could ask him, he began showing them double exposures he’d been secretly making of them with lotus flowers.

Then Rae began:  “Are you afraid of death?”  I wondered if the man thought they were about to kill him.

He spoke for a while and then suddenly started pointing at me.  Max explains, “He used to work for the government and he is worried what he said could get him in trouble. He wants take two.”  And then he spoke freely for several minutes about his coming demise.

“Funny,” said Max. “The older people seem more comfortable talking about death.  This is not what we expected.”

“They have seen more of it,” I said.  “They are more used to it than people your age.”

After a walk through a 19th century maze, in which I met an old man with gentle eyes who had “never met a foreigner,” we reboarded the tram.  The sky had darkened and thunder rumbled in the air. As drops pelted the ground we were spirited away.  Back to the city of the living and away from the marble monuments of the departed. 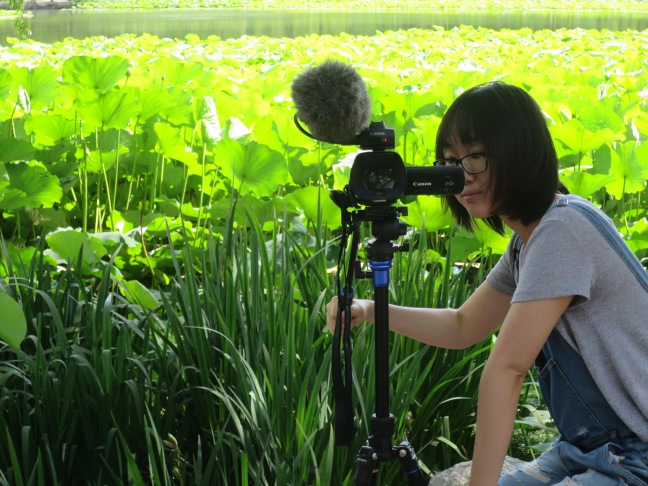