I arrived in Beijing a few days early.  Next week begins a study tour for 14 members of the faculty at the college where I teach. But first I wanted to explore Beijing on my own.

I ditched my bags at the hotel and headed out, landing myself at a random spot in central Beijing. Before me was the Donghuangchenggen Bieijie, a long narrow park that follows part of the footprint of the now demolished Ming Dynasty city walls.  I picked up a piece of curry chicken from a street vendor and started to meander down the path. 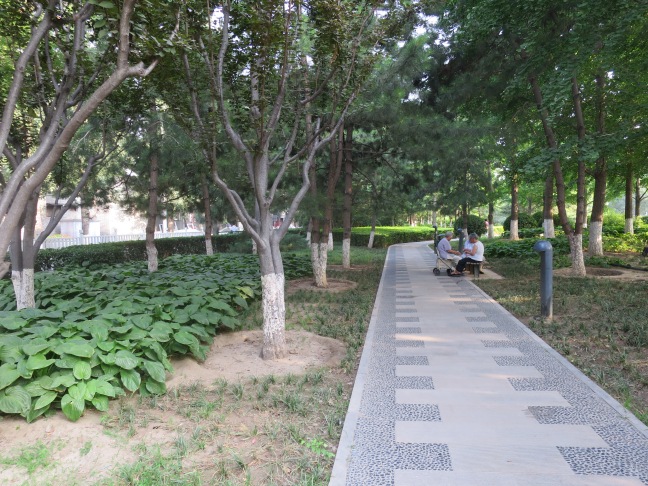 During my last trip to China I came to understand that stern looks were often a sign of curiosity, not unfriendliness.  So I met any glances with nihao (hello) and a smile.  I sat with a few people and tried my pathetic few words of Mandarin. (I learned using Pimsleur – which I now know is designed for business people looking for fun.  Lesson three: “Would you like to have a drink?”)

After walking several blocks of crepe myrtle, roses and hosta, I came on a plaza with lots of parents and toddlers.  Diapers are not big here and toddlers will often go altogether bottomless or have an opening in the back of their pants for easy delivery.  A father was walking with his bottomless son and the boy looked up at me and said, “Ya ya.” This means “uncle” but is meant as a term of endearment for adults who are not, in fact, your uncle.  I was honored.  I continued on my way stopping here and there to meet people.  I was feeling welcome and at home. 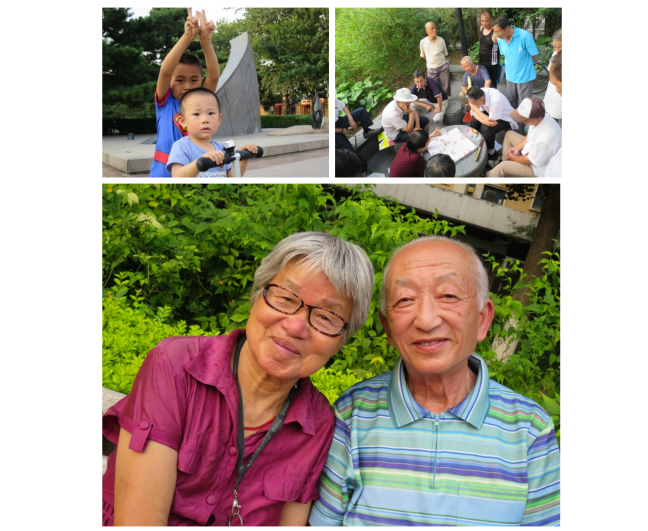 Old stone buildings on the next street piqued my interest and I veered off the park into a neighboring hutong.  The hutongs are the old Beijing neighborhoods in which siheyuan (courtyard residences) are lined along narrow alleys.  Each siheyuan is composed of a small group of individual houses arranged around a central courtyard.  There is one door from the courtyard to the public alley.  I have heard that these low-rise neighborhoods keep vanishing to high rises, highways and the like.

In the hutong, as in many neighborhoods in China, life is lived on the streets.  Dinner, dance practice, games of mahjong – all is often right in the open. That accessibility to peoples’ lives is one of the things I love about China. 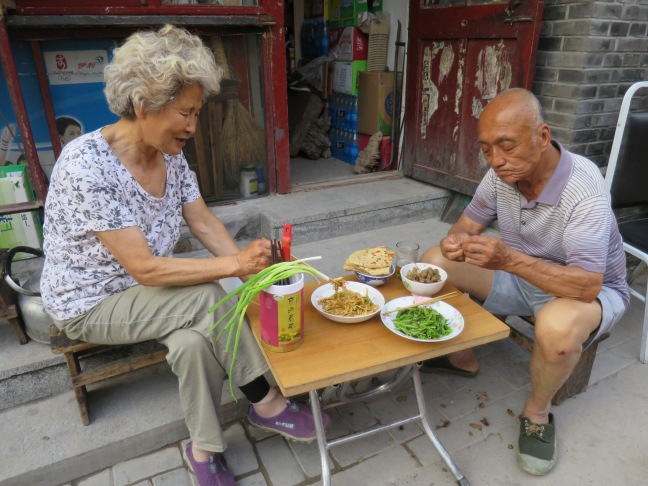 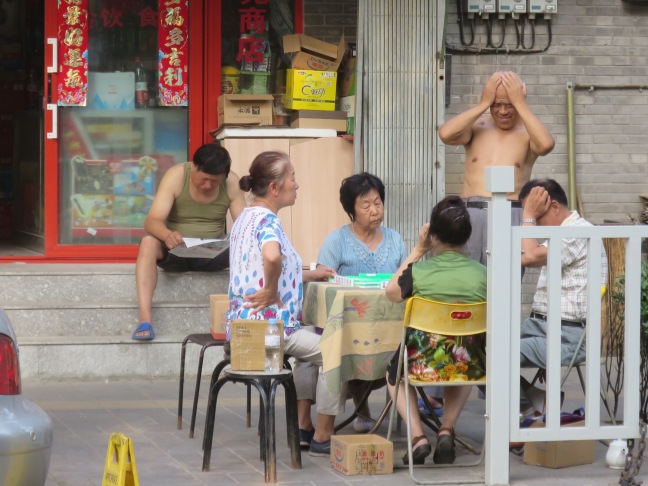 It was getting dark and I was getting hungry.  I had a Sichuan dinner in a small restaurant and enjoyed a phrase book conversation with the owner, who insisted we take pictures together.  Then I found myself at a corner of the Forbidden City. 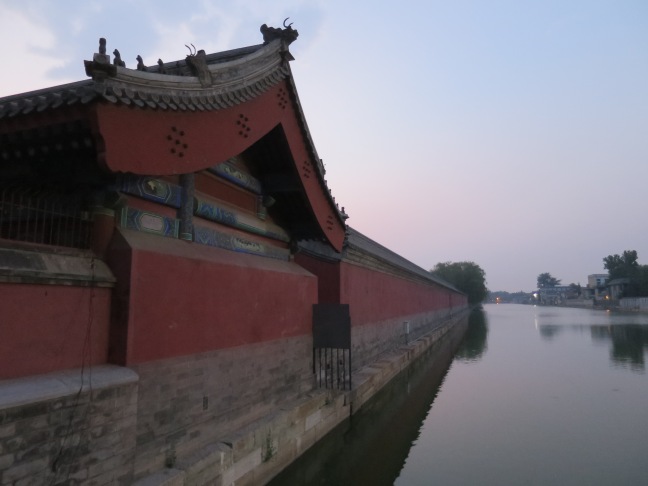 Several fishermen were pointing lasers in the water, I presume as lures.  It seems in Beijing it is acceptable for men, of any age or girth, to roll up their shirt to expose their mid-rifts.  Each fishermen proudly displayed his belly as did the rollerblading stunt dude in the plaza behind me.  I walked along the big red wall of the Forbidden City and noticed a young guy staring intently at me.  I went over and said hello.  We struggled in a mix of English and Mandarin.

“Where you come from?”

We stopped in front of the southern gate to the Forbidden City and he insisted on taking my picture.  We kept walking together, smiling and joking.  Then I thought, ah Pimsleur!

No cabs about, but Felix (he wouldn’t tell me his Chinese name) grabbed a motorcycle taxi. This is cool, I thought.  The driver was slim and wore a shirt which said in ridiculous English: “Think Left Heart.  It is the most com.”  He donned shiny leather shoes which he displayed by sitting side-saddle, his legs elegantly crossed near the open door. 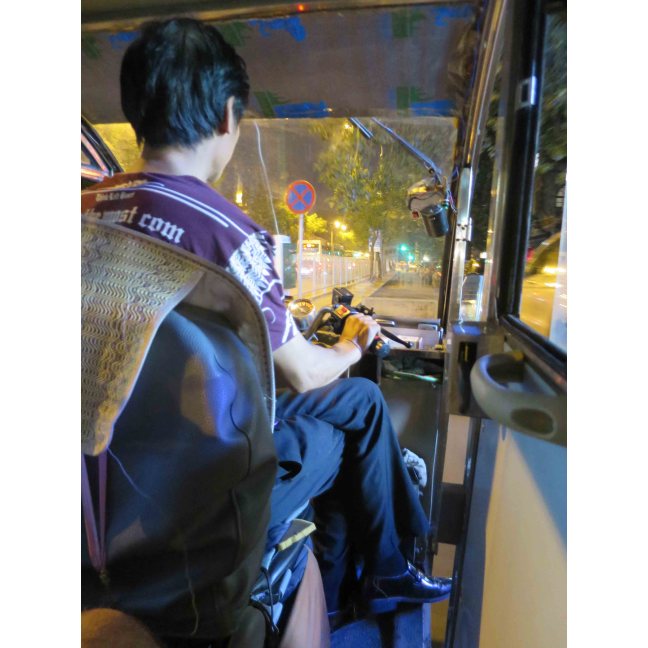 Felix and I sat and had a drink.  Then he touched my wedding band.  “You married?”

He suddenly looked horribly dejected. I showed him a picture of my husband, who is Chinese, thinking this fact would somehow cheer him up.  “Oh.”  He looked away.  Time to go, I thought.  I said my goodnight, gave him a hug and headed to a nearby subway stop.

I was exhausted.  Jet lag knocked me to my hotel bed and I slept soundly until 4:45 the next morning.  Ah, jet lag.

The next day I would meet two of my students from school.  We had conspired to make a short film asking people on the street about death.

More on that soon.