In the land of Confucian filial piety and single-child families, being gay vibrates at a different frequency than in many other countries.  Honoring your ancestors, reproducing and fitting into rigid social norms put special pressures on gay Chinese kids. Nobody knows this landscape better than of one the young chroniclers of queer life in China, documentary filmmaker Fan Popo. 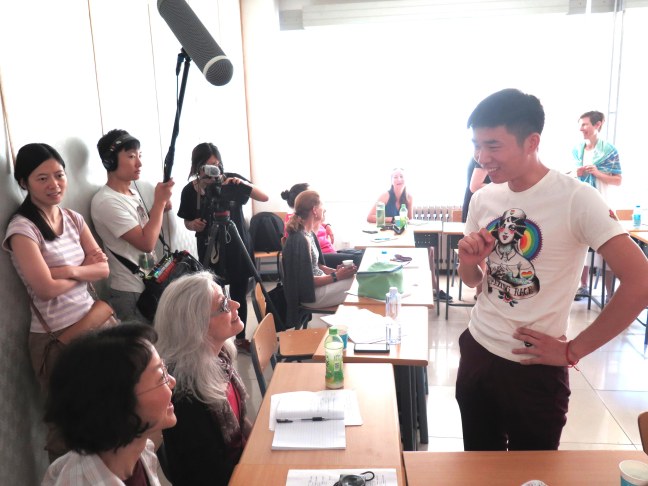 Popo showed up in our classroom with a film crew in tow.  Not his, but an online magazine covering his work.  One might expect a lofty self-opinion with such an entrance, but sporting chipped red nail polish and a slight stoop from life on the keyboard, Popo took the dais and won us over with a generous smile and modest comportment.

“They beat my son until he was bloody,” a fierce mother in Popo’s film Mama Rainbow describes the bullying of her son in a Chinese high school.  “They wanted to send him away from the school.  And there was no punishment for the students who beat him.  I would not stand for it.”  This touching work is simple in structure, just mothers and their queer kids talking.  But pair after pair remind us that love between parent and child trumps Confucius and begs to differ with Chinese heteronormative conformity.

Gay life is steadily improving in China.  Being gay was removed from the official Chinese list of psychiatric disorders in 2001 and the anti-hooligan law that was once used to stop gay organizations from meeting is now rarely enforced.  But gay Chinese are not equal yet.  A couple who recently sued to have their marriage recognized was rebuffed by the courts.  And while attitudes are shifting, street interviews in another of Popo’s films chart the rigid lines between the educated and the ignorant.

In a sweet bit of irony the Chinese word tongzhi (comrade), traditionally used by the communist party, now refers to gays and lesbians.  With the dedicated work of brave people like Fan Popo one hopes the Long March of the Tongzhi won’t be that long after all.